OCP outlines its diversity policy at the Concordia Annual Summit 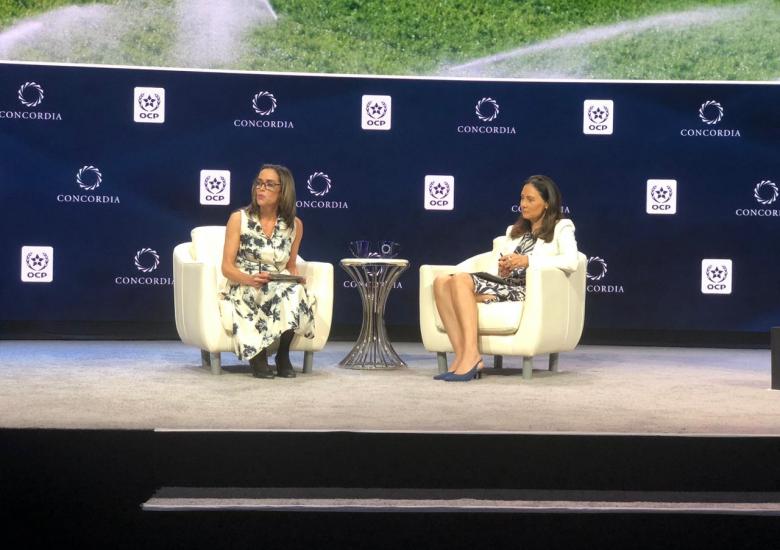 OCP Group took part in the Concordia Annual Summit, a high-level gathering that took place from September 22 to 24 in New York, on the fringes of the United Nations General Assemblies. On Monday, September 23, Mme. Ghislane Guedira, Executive Vice-President – Chief Financial Officer of the Group took part in a side-event discussing the place of women in global companies.

During this panel entitled « Sowing the seeds for inclusive leadership », Mme. Guedira exposed the diversity policy led by OCP Group within its management but also through initiatives promoting the empowerment of active women in agriculture.

She mentioned the increasing power of diversity within the Group. According to her, almost 17% of OCP’s Top Management is composed of women who work in different departments and cover various continents. A mosaic of leading women profiles was shared with the audience, giving them an idea about the evolution of women within the Group’s top governance.

Diversity is also operated within the executives of the Group that counts approximately 23.000 collaborators in the world. “More than half of the executives under 30 are women at OCP” stated Mme. Guedira during her intervention.

Another example of OCP’s willingness to promote women empowerment is through the support of farmers and agro-entrepreneurs on the African continent. “In Sub-Saharan Africa, women are more involved than men in the economy. 70% of farmers are women but their literacy still lags behind. We need to work on this matter and OCP is already engaged through different types of trainings,” declared the EVP – Chief Financial Officer of the Group.

In reality, OCP launched, in several African countries, training programs intended to farmers, which highly impact women. We can mention several initiatives deployed by OCP Africa such as Agribooster or OCP School Lab. Launched in order to offer farmers tools to increase their yields, these programs reached more than 400.000 African farmers. The Group thus helps improve the living standards of African farmers by giving them appropriate training regarding their activities.

To conclude, Mme. Guedira says “the empowerment of women is not only an asset, it is mostly a key factor in the fight against hunger and poverty”.

A dozen influential women in Africa visited the university.