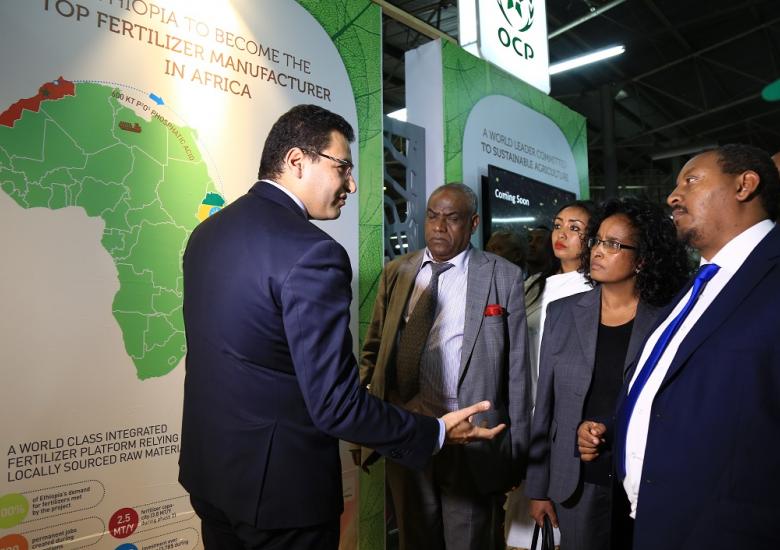 Addis Ababa hosted the 11th International Trade Fair from November 1 to 5, 2018. Organized by the Ethiopian Chamber of Commerce, the event welcomed OCP for a second time, allowing the company to present its activities to the Ethiopian public.

OCP Group’s presence took the form of a booth illustrating the specific actions undertaken by the company for the development of Ethiopian agriculture, on the one hand, and presenting the Dire-Dawa integrated fertilizer production industrial complex, on the other. Her Excellency Fetlework Gebre Egziabher, Minister of Trade and Industry, visited the OCP booth, and His Excellency Misganu Arga, State Minister at the Ministry of Trade and Industry, awarded OCP Group the prizes for best booth and best partner.

In order to achieve Ethiopia’s ambitions, OCP Group, a strategic partner of the country since 2012, supports one of the country’s economic pillars, agriculture, by meeting all the country’s adapted phosphate fertilizer needs and collaborating in the creation of an Ethiopian soil fertility map.

In the context of its international development, OCP opened a representative office in Addis Ababa at the end of 2015. The office works closely with Ethiopian farmers and supports agricultural development on the ground in various sectors, including commercial crops, sugar cane, cotton, coffee, sesame, and corn, while also providing support to the country's blending units, among other things.

In late 2016, OCP strengthened its commitment to Ethiopia by signing a strategic partnership with Ethiopia's Ministry of Public Enterprises to build a world-class fertilizer production platform in Dire Dawa. This is a large-scale project aimed producing 2.5 million metric tons of fertilizer before reaching its full potential of 3.8 million metric tons per year.

Ethiopia: OCP takes part in the high-level meeting of the EWA initiative

As part of the 32nd African Union Summit in Addis-Ababa, Ethiopia.

It will create a soil fertility map for 100,000 hectares