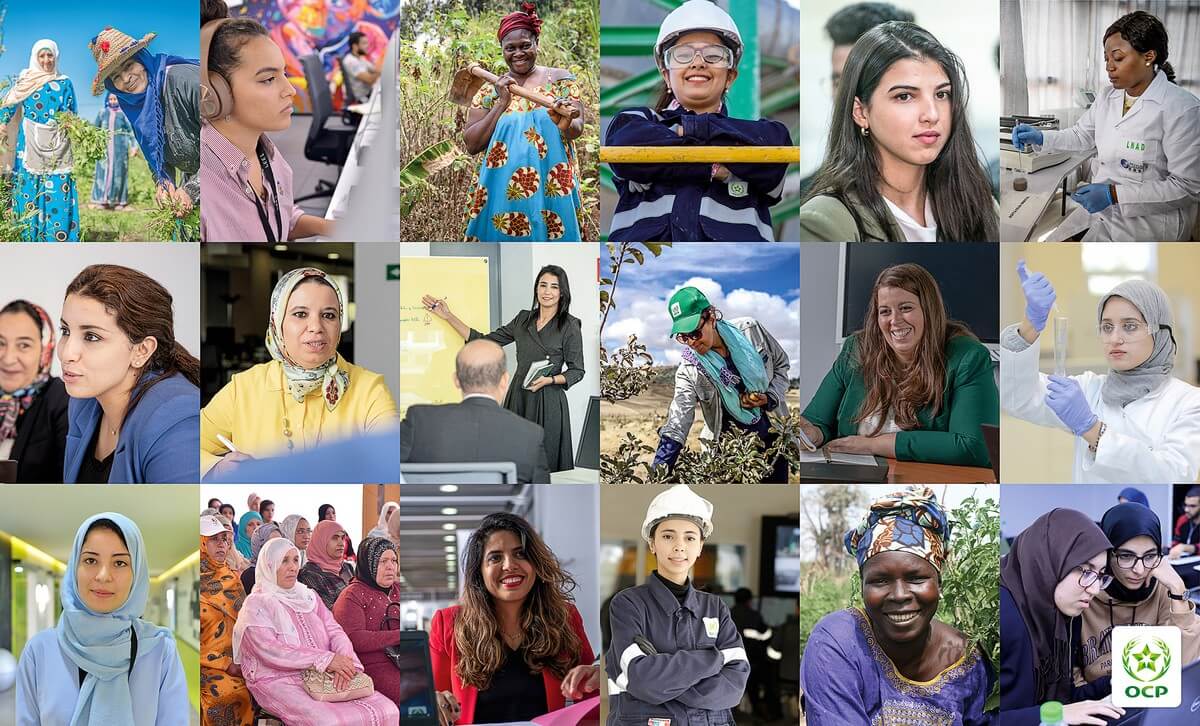 OCP Group, world leader in the plant nutrition and phosphate fertilizer market, recognizes diversity as an engine of socio-economic growth spanning the promotion of education and entrepreneurship. Its actions are informed by the 2030 Agenda of the UN’s Sustainable Development Goals (SDG) program.

OCP Group’s “Diversity” program aims to promote gender equality amongst the company’s employees, its ecosystem and its various stakeholders.

This program emerged as a result of an internal initiative by OCP Group called “Movement”, which allows employees to work on a project of their choosing that provides value and is innovative for the Group.

Since 2013, the percentage of women across OCP Group’s workforce has increased steadily. A study we conducted with the Boston Consulting Group firm into the Group’s diversity revealed that:

OCP Group has set up a training program within its « Learning Institute », adapted to the needs and aspirations of its female employees with, among other things, a coaching program on “Female Leadership”. It also runs “Café Culture” events for discussion and debate, with a schedule of renowned internal and external speakers.

Throughout 2021, the “Diversity” program is enabling a series of local initiatives across our industrial sites to improve the working culture of female employees. This will be deployed through the Connect’Her network and will include a female mentoring program to enable women to develop leadership skills, build confidence and improve professional acumen.

The vision of the Group regarding the promotion of women is not limited to its workforce. It goes beyond, within its ecosystem, and undertakes several initiatives for the benefit of communities living around its sites.

The Moroccan coding schools of 1337 and Youcode, founded by OCP Group and located in Khouribga, Benguerir, Youssoufia and Safi, welcomed a female cohort of 10% and 38%, respectively, in their first year. In addition, 368 young girls (out of 670) attended secondary education and preparatory classes for the Grandes Écoles (engineering schools in France), thanks to another school launched by the Group: the Lycée d’Excellence (LYDEX) of Benguerir. Moreover, the IMPULSE program – launched by the University Mohammed VI Polytechnic University – has enabled and encouraged young women to launch start-ups in fields such as agritech, biotech and mining technologies.

Several initiatives have been put in place by the Group in order to promote female entrepreneurship, following the UN’s SDG to “promote inclusive and sustainable economic growth, full and productive employment and decent work for all.”

The Group’s “Al Moutmir” initiative aims to support, in particular, smallholder farmers towards economically viable and sustainable, innovative agriculture. “Al Moutmir” caravans travel Moroccan regions to offer training and coaching in regards to agriculture. Since its launch in 2014, approximately 240 female farmers in 12 regions of Morocco have benefited from it. This mobile program, based on promoting better agricultural practices, techniques and governance, and, in particular, customized fertilizer application to preserve natural resources, supports smallholder farmers through training and sessions on good agricultural practices, as well as ‘Blending’ demonstrations (the mixing of various fertilizers to achieve a custom-made formula).

Moreover, the OCP Foundation has supported the economic empowerment of 700 rural women and launched several projects for the development of the agricultural sector in Gambia and Senegal.

With the aim of strengthening its actions to promote female entrepreneurship at the highest level, OCP Group will adhere to the Women’s Empowerment Principles (WEP), an UN-Women initiative that promotes gender equality within their environment.