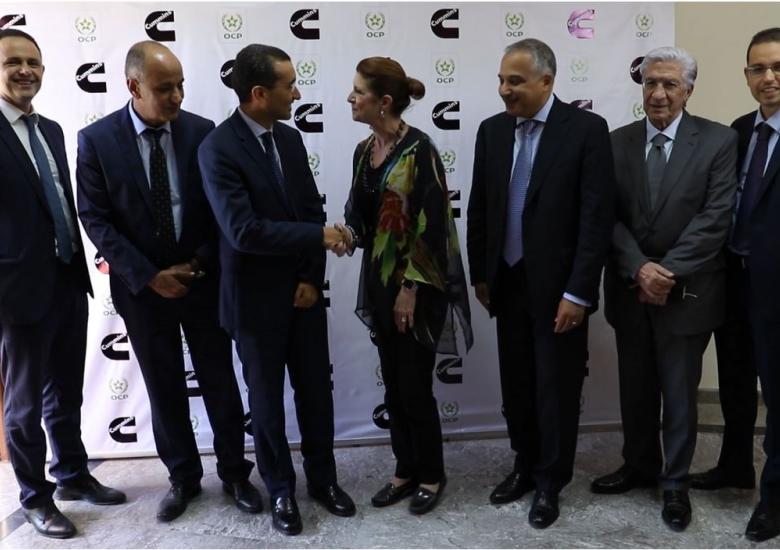 Industrial Fertiparc of Oued Zem will host in 2021 the first regional Center for the Reconstitution of Cummins Engines in north and west African regions. This implantation is the result of 4 years of negotiations between OCP and the American multinational giant Cummins and will make the region of Khouribga a continental hub of mining machinery engine maintenance.

OCP group has taken the development of its industrial ecosystem to the next level thanks to this freshly signed partnership with the world leader of thermal engine manufacturing. This deal marks a historic relationship between the two leaders and focuses on the deployment of a Regional Engine Reconstruction Center (MRC) in the Khouribga region.

The new unit will be dedicated to on-site maintenance of Cummins engines machinery, which, as a reminder, represents about 40% of OCP’s mining equipment.

The agreement between the two parties will enable OCP to accelerate the acquisition of practices up to “best in class” standards in this field, and improve its operational performance all along, while optimizing inherent costs of maintenance. Offered possibilities in terms of technology transfer are not to be forgotten, of course.

On top of maintaining OCP’s equipment, the MRC will constitute a premium industrial platform meant to receive Cummins engines that have reached the end of their cycle from 20 countries in Western and North Africa. Once received, the engines will be disassembled and closely inspected, this diagnostic will help identify faulty components to replace them. The engines will then be reassembled, run on an engine test bench, and finally sent back to the clients.

Beyond this industrial aspect, this partnership emphasizes OCP’s commitment to stimulate the local ecosystem. It is therefore not a surprise that during negotiations with Cummins, the Group required that MRC (Master Rebuild Center) be implanted in Fertiparc at the Oued Zem Complex in Khouribga. Which actually confirms OCP’s desire to be a locomotive for the development of the regions where it operates, Khouribga included. In fact, Khouribga was chosen after very long negotiations between OCP and Cummins. Discussions were held where the Group defended Morocco against 5 candidate African countries to host Cummins’ infrastructure first, and then convinced Cummins to establish the MRC in Khouribga, among 3 other national competitors. It must also be said that the appeal of the Fertiparc offer has contributed a lot to the convincing of Cummins’ Management team. The site benefits from an incomparable connectivity to the highway and the city of Khouribga, an attractive rental model, proximity to a vast employment area and funding provided by the government.

The MRC should be operational by 2021 and will occupy a 14,000 m2 area. The unit will have the capacity to reconstruct about 100 engines/year, and employ 75 people. The establishment of MRC will mobilize a sum of 40 millions of DH and will allow 75 technicians and engineers working in the site to benefit from Cummins’ internal training.

This location will be the 16th Cummins MRC at the global level, 2nd at the continental level and 1st at the West and North African level.

"Mining Challenge by OCP", Open Innovation at the service of the 4.0 mine

A call for startups to find digital solutions in mining issues.

Ethiopia: OCP takes part in the high-level meeting of the EWA initiative

As part of the 32nd African Union Summit in Addis-Ababa, Ethiopia.

The award recognises excellence in health and safety.