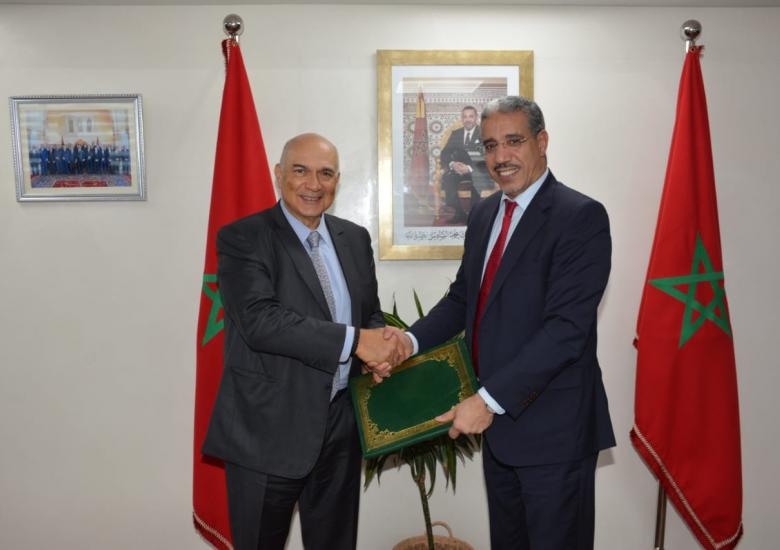 The Ministry of Energy, Mines and Environment (MEME), the OCP Group and the Mohammed VI Polytechnic University (UM6P) have signed a partnership agreement aimed at strengthening collaboration between the parties, particularly in areas of education and research as well as sustainable development. The signature took place on Tuesday, December 17 2019 in Rabat, in the presence of Mr. Aziz RABBAH, Minister of Energy, Mines and the Environment, and Mr. Mostafa TERRAB, Chairman and CEO of the OCP Group.

This Partnership agreement is also in line with the actions carried out under previous partnership agreements between MEME and OCP Group. Thus, in the field of education, training and research, the new convention aims principally to develop a new inclusive approach to education and training in various fields, in particular in the mines and the mineral industry. Then, it will be a question of promoting scientific and technical research in the said fields, in synergy with national and international institutions. Finally, the parties intend to achieve the integration of the various players in the mining sector on a national scale. In this sense, an action program will be deployed based on partnerships between the UM6P and the concerned education institutions.

Sustainable development is also a crucial element of this partnership agreement through which MEME and OCP intend to combine their efforts, skills and experience in order to identify and implement an integrated program for environmental protection and sustainable development. This program aims in particular at strengthening the "Circular Economy" approach, at contributing to community engagement and at implementing the national sustainable development strategy. The parties also intend to work for the development of renewable energies and the preservation of water resources in order to allow the OCP Group to reach its objective of 100% clean electricity and 100% unconventional water in 2028.

MEME, OCP and UM6P also signed a Specific Agreement for the creation and development of the African Center of Excellence for Mining. It will play a key role in training, research and development of the Moroccan and African mining sector. The center will be established at the UM6P on a 10.000m² surface area, and will feature several technical platforms. To achieve its objectives, the center will rely on the Benguerir "Experimental Mine" and on the other laboratories and departments of the UM6P and will create bridges between Moroccan and African universities and schools.

The two agreements strengthen the development of Ghanaian agriculture.