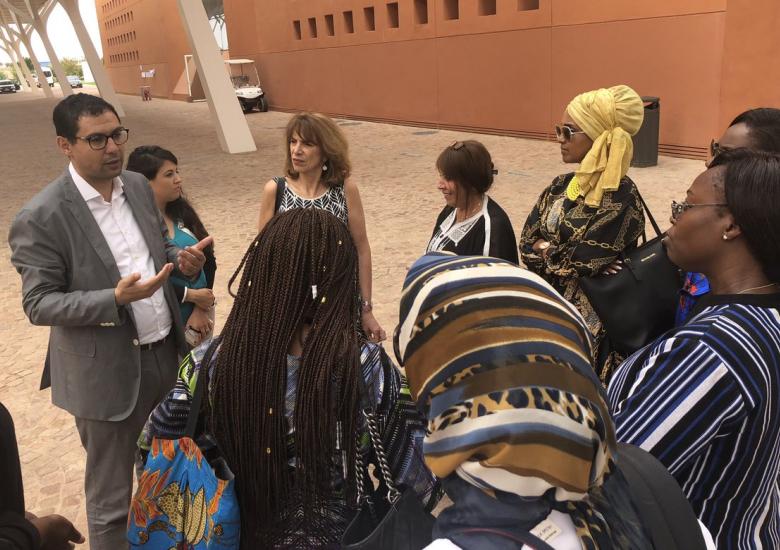 In a 2-day assembly in Benguerir, the Ambassadors of Women in Africa (WIA), an initiative made up of a dozen influential women who defend the WIA initiative in the continent, visited the facilities of Mohammed VI Polytechnic University.

WIA President Hafsat Abiola-Costello hailed the collaboration with OCP, which supports the cause of African Women to bring Africa to the forefront. She also shared her vision of Africa and emphasized the role of ambassadors in changing the image of women in the continent.

In the same vein, Sana Zenjari, Communication Director of OCP Foundation, presented the various projects of the foundation in Africa. She looked back at the farm caravans for small farmers in different countries and their indirect impact on women working in the agricultural sector.

Following the visit led by Khalid Baddou, the Communication Director of UM6P, some ambassadors gave their feedback and impressions of their stay at the University.

WIA Ambassador to Senegal, Rokhaya Solange Ndir said that "UM6P is a place where, for two days, we are in contact with innovation, research; in contact with what will advance and help our continent emerge. We have seen modern, state-of-the-art infrastructures and we have also met a professoriate with expertise of international scope. We are convinced that Africa must have infrastructures of this type to accompany and train its youth who will have to bring about the emergence of Africa".

Thanking OCP teams for this opportunity, the Senegalese Ambassador of WIA promises "to become ambassadors of what is being done at UM6P by showing the rest of Africa how Morocco was able to have this advance in terms of professional training ".

For her part, Irene Kiwia, WIA Ambassador of Tanzania, says she is very impressed by the innovation and positive energy that encompasses UM6P's vision beyond its architecture and infrastructure. For this influential woman I n the continent, especially on issues related to training, " UM6P is leading this emerging Africa and it is up to us now to acquire knowledge to better impact the lives of Africans towards development ". Finally, with great enthusiasm, she declares smiling: "It is to UM6P that I will send my son in 4 years to follow a high-level training on the continent".

On the sidelines of their visit to UM6P, WIA also organized on June 25th and 26th, the "WIA54" workshops. This is a competition launched by the WIA Philanthropy Foundation for female entrepreneurs in Africa.

The different workshops focused on themes that affect women's activities in Africa such as agriculture, digitalization, education, fintech, health, environment and social innovation.