New agreement on sustainable fertilizers for OCP and Fraunhofer IMWS 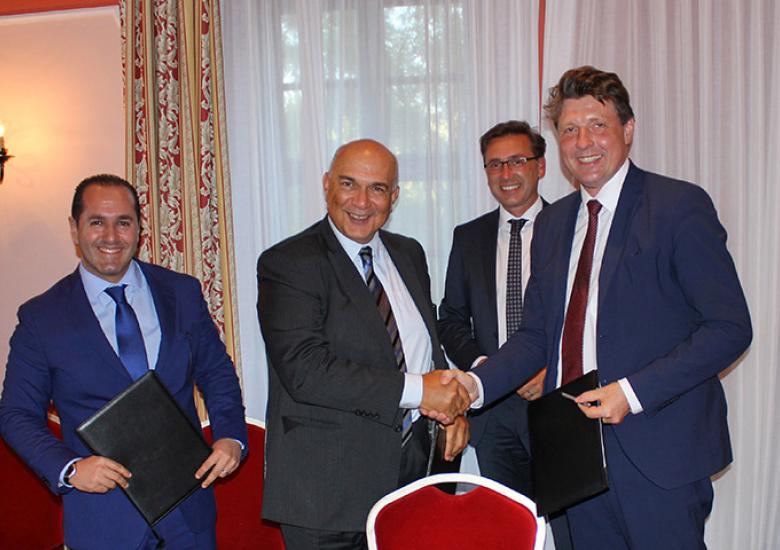 Mainstreaming Green Hydrogen and Green Ammonia as raw materials for the fertilizer industry: With this goal in mind, OCP Group, the world's largest exporter of phosphates, and the Fraunhofer Institute for Microstructure of Materials and Systems in Halle (Saale), will cooperate even more closely in the future. The two institutions signed a Memorandum of Understanding to work jointly on solutions for a sustainable fertilizer industry.

The Memorandum of Understanding provides for continued cooperation with the aim of boosting the use of renewable raw materials in the fertilizer industry. The focus is on two raw materials: Green Hydrogen, which is obtained by electrolysis using electricity from renewable energies, and which can be further processed into numerous products for the fertilizer industry; and Green Ammonia, consisting of Green Hydrogen and nitrogen, which can serve as a raw material for the production of fertilizers, amongst other uses.

"Green Hydrogen and Green Ammonia offer tremendous potential to sustain the supply of raw materials to the fertilizer industry. They also reduce the industry’s dependency on oil, natural gas and any other fossil fuel. I am pleased that our many activities in the area of Chemistry 4.0 are being perceived internationally, and that we can now continue to advance these technologies with a globally leading company such as OCP, to prove that Green Hydrogen and Green Ammonia can be used on an industrial scale - and at prices that make sense for the companies" says Prof. Ralf B. Wehrspohn, Director of the Fraunhofer IMWS.

“Responsibility for the environment has always been important to us, not just when working in our mines, but as a fundamental principle of our circular economy approach. The use of Green Ammonia fits in with this strategy. It can help conserve valuable resources and provide our customers with sustainable new products. That's why we are looking forward to strengthening our cooperation with Fraunhofer," says Mostafa Terrab, Chairman of OCP.

Under the leadership of the Fraunhofer-Gesellschaft, a pilot plant is already being built in Leuna (Germany), a site with a long tradition in the innovative industry. Green Hydrogen will be produced and made available for a group of companies based there from 2019. A similar platform, which can also produce Green Ammonia, will be developed in Morocco by OCP Group and the Green Energy Park in Ben Guerir, with the support of Fraunhofer IMWS. The delegation from Morocco also visited the Fraunhofer Center for Chemical- Biotechnological Processes CBP in Leuna and discussed the opportunities of biotechnological phosphorous modification and electrocatalytical synthesis of Ammonia.

The German-Moroccan cooperation has proven itself repeatedly. Experts from Halle were advisors in the construction of the Green Energy Park, which opened in 2015. This test and research platform for photovoltaic modules and systems is one of the largest test field for photovoltaic and solar thermal energy in Africa. In the Green Energy Park, the performance characteristics of solar modules and systems as well as location-dependent influences such as solar radiation, wind, pollution and temperature can be investigated in real time. As part of the new cooperation agreement, the possible establishment of an African Institute for Solar Ammonia was also discussed.p

“In the conception and establishment of the Green Energy Park, we have had very positive experiences with the cooperation with Fraunhofer. I am sure that pooling our expertise will once again provide excellent solutions and further promote the development of renewable energies in Africa," says Badr Ikken, co-president of the Green Energy Park and General Director of the Moroccan Institute for Research in Solar Energy and New Energies (IRESEN), with which Fraunhofer IMWS has been cooperating since 2012.

Badr Ikken (General Director of the Moroccan IRESEN), Mostafa Terrab (Chairman of OCP Group) and Prof. Ralf B. Wehrspohn (Director of Fraunhofer IMWS, left to right) signed a Memorandum of Understanding. In the background: Thomas Wünsch (Secretary of State, Ministry of Economy, Science and Digitalisation in Saxony-Anhalt). © Fraunhofer IMWS

An agreement to co-develop fertilizers and smart agriculture.