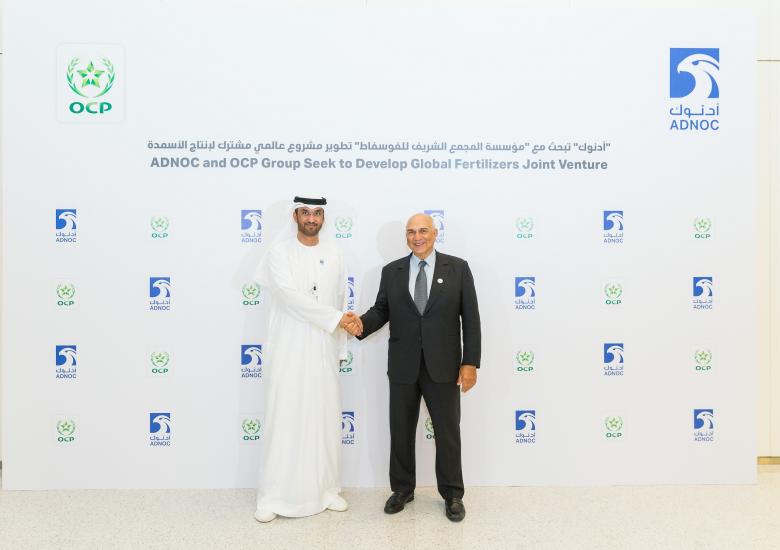 OCP Group and The Abu Dhabi National Oil Company (ADNOC) have agreed to explore the phased creation of a new global fertilizers joint venture, in a move that will accelerate the execution of both ADNOC and OCP’s international strategies.

The proposed joint venture will build on both companies’ competitive advantages, namely ADNOC’s world-scale sulphur production, ammonia and gas expertise, and shipping and logistics network, and OCP’s access to large phosphate resources, its century-long fertilizers know-how and its marketing network, to develop a new global fertilizers producer. The proposed partnership will comprise two fertilizer production hubs, one in the UAE and one in Morocco (utilizing both existing and new assets), giving the proposed joint venture global market reach.

This proposed project extends the partnership already established through the existing long-term sulphur offtake agreement that was announced by the two firms in December 2017. The two companies will work on developing capabilities that will support this venture, as they expand their partnership, leveraging their respective strengths and building their human capital.

The agreement aligns with ADNOC’s announced plans to increase production by at least 50% from its current levels of 7 million tons a year, as it looks to increase gas production by tapping into vast gas caps and scaling up sour gas production. OCP has engaged in a large-scale development program that will enable it to capture its fair share of growing demand for fertilizers. The first phase of this program was completed this year and has brought the Group’s existing fertilizer capacity to 12 million tons, and rock export capacity to over 18 million tons.

Commenting on the agreement, H.E. Dr. Sultan Ahmed Al Jaber, UAE Minister of State and ADNOC Group CEO said: “The proposed joint venture with OCP Group illustrates ADNOC’s intent to maximize the value of all our resources, as we grow our downstream business, diversify our product range and increase revenues. The agreement builds on the expanded partnership model we announced last year, as we open our entire value chain to reliable, value-adding, long-term partners, who can complement our capabilities and resources, and enhance our market access.

“Importantly, this agreement is aligned with the directives of our leadership to further build on the existing close relationship and ties between the United Arab Emirates and Morocco, and we look forward to building on these firm foundations as we work towards potentially building a new global fertilizers champion.”

Mr. Mostafa Terrab, OCP Group Chairman and CEO, said: “This collaboration between our companies brings together the world’s largest phosphate reserves and the world’s largest sulphur production capacity and it represents an unprecedented alliance in the industry, providing the partners with a world-class integrated asset base and complementary geographic locations. We view this new partnership as a unique opportunity, in line with our global strategy, that will contribute to our ability to serve growing demand for fertilizers worldwide.”

The agreement comes as ADNOC, at its Downstream Investment Forum which took place the 13rd and 14th, May in Abu Dhabi.

An agreement to co-develop fertilizers and smart agriculture.

Acquisition will help with innovation and product customization.